We are a family owned and operated company serving thousands of satisfied funeral directors for over 75 years. We are proud to bring you to our revised website to showcase our hundreds of quality products.

We are known for our low prices and personalized service, so call us today to talk to any of our knowledgeable staff (usually one of the family). Scroll through our pages and contact us if we can answer any questions. Satisfaction is guaranteed!

During World War II, Mr. Bright’s son was a great pilot becoming one of the United States Navy Aces. Unfortunately, his son lost his life in the war and died a hero. Losing the desire of wanting to run the business, C.E. approached William to see if he would like to buy the business. William and his wife Wilma began discussing the opportunity that was now before them. After much prayer and thought, they decided to purchase the Bright Company in 1945. William, his oldest son Bill, who had recently returned from the war, and his youngest son Edward began running the business out of the family home in Anderson, Indiana.

Bill Bowser was always full of energy and life. Even at age 95 years, he would come into the office on most days. His bright smile and positive energy were infectious. He served as the President and a Co-Owner of the company until his death in the Spring of 2018.

Bill was a co-pilot of a B-25 Bomber during World War II. After the war, he came home to run the Bright Corporation with his Dad and brother Ed. The three of them built up this tiny business which was run out of the family home into the nationwide company it is today. And, as is said, the rest is history.

Ed Bowser has been with the Bright Corporation longer than anyone throughout its history. Today, he is 90 and still works most of the week. He started working for C.E. Bright as a teenager. In 1945 when his Dad bought the business, Ed, at the age of 15 knew more about the business than anyone.

Ed served in the United States Air Force and also received his MBA from Indiana University.

He enjoys spending time with his family and traveling. One of his fondest memories is celebrating his fiftieth wedding anniversary with his wife Ruth at Walt Disney World with his entire family including his six grandchildren.

Steve Bowser has been the voice of Bright Corporation for many years. Throughout the years, Steve has built deep relationships with many customers. Chances are good that when you call you will get to talk with Steve. His passion is helping customers like you find the right products to serve the needs of the families who choose to use your funeral home.

Steve is the son of the late William D. Bowser who was our president for many years. He has been an instrumental part of the executive team for 47 years. He graduated from Anderson University with a Bachelor of Arts degree in 1975.

Steve and his wife Carla attend Madison Park Church of God and he also serves on the Madison County Youth Serving Christ Board. Their son Colin is a student at Regent University.

What does Steve love to do in his spare time? Well, one word – sports. He is an avid sports fan and he and his wife enjoy cheering for the Indianapolis Colts where they are season ticket holders. Steve is also a fixture every year at the Indianapolis 500.

Johnathon is the great grandson of William H. Bowser and the grandson of President and co-owner William D. Bowser. Johnathon graduated from Anderson University in 1998 with a BA in Business Management and Marketing.

Over the years, Johnathon has worn many hats at the Bright Corporation. Early on, he was part of the production staff. Then, he moved on to become Warehouse Manager and Payroll Director. Today, he holds the position of Chief Operating Officer/Secretary Treasurer.

Johnathon lives in the Indianapolis area with his wife Amy and their two children: Lily and Andrew. He loves spending time with his family and being outside. He is an avid sports fan, particularly Indiana University Basketball.

Johnathon and his family are active in the Crossing Church in Indianapolis. Over the years, he has enjoyed working with the youth at the church and coaching junior high boys’ basketball for the local school system. 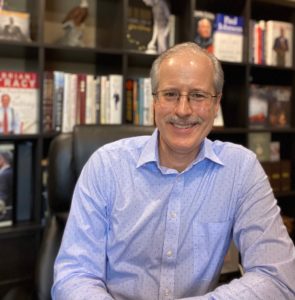 Mark is the grandson of William Bowser, Sr. and the son of Ed Bowser. Mark worked at the company during his high school and college years learning all aspects of running a successful company. After college, he joined the firm as one of their executives.

Mark has traveled for many years as one of the United States top Sales, Customer Service, and Leadership speakers. Over the years, Mark has presented thousands of seminars including to organizations such as Southwest Airlines, Ford Motor Company, FedEx Logistics, Sony Music, the United States Air Force, Princeton University, Purdue University, and many more.

Mark is the author of several books including Jesus, Take the Wheel, Nehemiah on Leadership, Some Gave It All with Danny Lane (endorsed by Chuck Norris), and Sales Success in which he wrote with motivational greats Zig Ziglar, Tom Hopkins, and Scott McKain. Listen to Mark tell some of the best untold stories of history on his podcast, Let Me Tell You a Story!

Mark, his wife Sarah and three children live in the Cincinnati area.

When it comes to the beauty and inspiration of Bright Corporation, Wraps of Remembrance, and Bright House Publishers products, Debbie Apple’s fingerprint are present everywhere. Debbie has over thirty years of experience in Graphic Design & Illustration. She owned her own successful business for seven years before Bright convinced her to joining our team. We are so glad we did. She has been a part of the Bright leadership and creative team ever since – and that was over twenty years ago. We are stronger because of her.

In her spare time, Debbie enjoys painting, reading, finding unique antiques, the five-string banjo, and of course spending time with her family.

Maxwell is a self-taught website developer and technology support consultant. You can find work on his website and GitHub profile.

Over the course of the last six years, he's led website redesigns, usability testing, disaster planning, product maintenance, and plug-in assisted language translation. Being naturally curious, Maxwell loves working with teams to understand where they are, where they want to be, what tools work, what don’t, and creating tailor-made technical solutions to help advance his clients’ mission. Some of the organizations Maxwell has supported include Bright Corp., Civic Hall, NYU, and Public Sentiment.

In his free time he runs a small treasure trove of add-ons for popular macOS apps called Pacmax, is learning 3D scanning and creating augmented reality experiences. He is based in Cincinnati, Ohio.

Our staff is confident in Bright Corporation’s ability to visually interpret the most creative, professional and meaningful life story in their beautiful Montage of Memories portraits, trifold bulletins, prayer cards, and memorial folders. We consistently receive the most heartfelt responses to these custom products from our families.

Becky BayliffBayliff and Sons Funeral Home
Dear Friends, we wanted to take a moment to let you know that we continue to be quite pleased with the service and products you provide for us. Bright Corp. has served three generations of our family over the more than 50 years we have been your customer. We have always been very happy to work with your company and your family. We appreciate that your products continue to be of high quality and appropriate expense in this age of ever escalating costs. Your family and your staff have always treated us with the highest level of courtesy and provided us with an outstanding quality of service. We look forward to many more years of collaboration. Thank you.

Erich WetzelWetzel and Son
When we need a professional result to a unique design challenge that arises with a family’s request, I call Bright Corporation. Their team of professional designers are on call for whatever surprise may come our way. It’s like having our own in-house graphic designer. In fact, we use their one of a kind 16×20 montage of memories for the majority of our services.

Ronald PrincipeOld Bridge Funeral Home
We have been doing business with Bright Corp. for over 35 years. They provide quality products at a great value. They have also gone above and beyond to accommodate some of our special requests through the years. We have been in the funeral business since 1946, practically as long as Bright! We too are a family owned and operated business. I am a second-generation funeral director and my son plans to join me after his graduation from the University of Minnesota. We hope we’re both around another 70 years.

Michael S. GarrityGarrity Funeral Home
We love dealing with the Bright Corp folks. They are dependable and very friendly. Haven’t ever met them but from my first phone call to them to them a few years ago,I feel like I have known them for years. Great products that we use in our funeral home. More companies could use and benefit from their caring, efficient, customer service services. Thanks.

Sandi WeilerPinkard Funeral Homes
Bright Corp has supplied our funeral chapel with fine quality stationery since our humble beginnings in 1998. Their affordable prices attracted us to their company in the start; their continued quality, innovation, and customer service have kept us with them since. We look forward to our continued partnership with this great firm.